The elegant, Victorian village of Knowlton is located in the heart of the Eastern Townships on the shores of Brome Lake and is known for its Loyalist history and British flavour, as well as for the quality and originality of its restaurants, boutiques and antique dealers.This exceptional village was first settled in 1802; many of its first inhabitants being United Empire Loyalists from the New England states. Originally known as Coldbrook for the stream that runs through the centre of the village, Knowlton grew into a successful settlement.

By 1855, the village had become the county seat with the Honourable Paul Holland Knowlton as its first Warden. Knowlton amalgamated with six neighbouring villages surrounding Brome Lake — Bondville, East Hill, Foster, Fulford, Iron Hill and West Brome — in 1971 to create the Town of Brome Lake. The Town now offers its citizens and visitors quality town services, exceptional community involvement and an unrivalled natural setting in which to enjoy the best life has to offer.

The Town’s natural and man-made beauty has been recognized several times on both a regional and provincial level as an entrant in the “Villes, Villages et Campagnes fleuris du Québec” contest. Nineteen ninety-one and 1996 saw the Town take 1st prize in the region of Monterégie. In 1996, the Town was also awarded the coveted province-wide “Iris d’Or” and the prestigious “Pommier en Fleurs” from the “L’Ordre des Agronomes du Québec”.

Thanks to the energy, enthusiasm and vision of the forefathers of Knowlton, the village continues to thrive and has now become a favourite year ’round destination for discerning travellers. 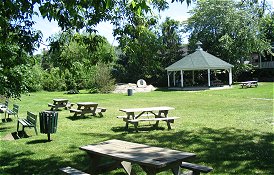 A special and historic gathering place in the center of the village ... the county's first Warden, Paul Holland Knowlton's gristmill, built in 1836/37 was located by the falls. The original millstone, with historic plaque, can be seen in the park. 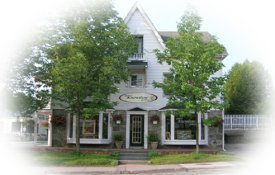 Situated in the heart of the village, the Knowlton Gallery features the work of renowned Quebec artists as well as the best artists of the Eastern Townships.
Discover a concept that renders homage to all forms of art .. paintings, photography, sculptures, ceramics, pottery, raku, blown glass, jewelry ... and much more. 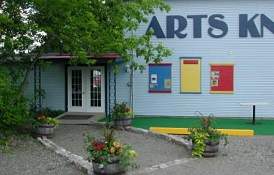 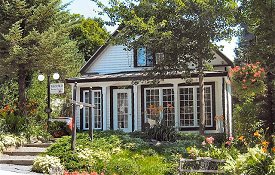 Knowlton's only luxury rental apartment. Ideally located in the center of the village, « Le Chien Noir » offers many exclusive features designed to ensure a relaxing and enjoyable stay. Please see our WebSite for more information. 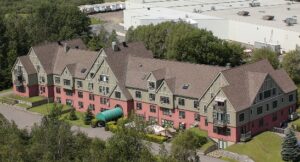 Built in 1868, the church was enlarged to its present size in 1898. The presbytery was built in 1905. As a result of the growing Roman Catholic population in the area, the summer chapel was built in 1963.
Bilingual Sunday Service: 10:30 a.m. 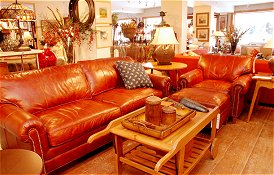 A home décor boutique to satisfy your every need. Whatever your look, from a relaxed country look to traditional elegance, Bousada can help make your house a home. Furniture and accessories, window treatments, bedding, wallpaper plus design and decorating services. 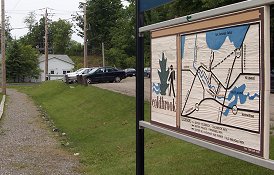 Enjoy yourself on our walking path which parallels the Coldbrook Creek, proceeds through the village taking you to the beach and along the lake. It's a beautiful combination of a stroll down the village streets and a walk in the woods. 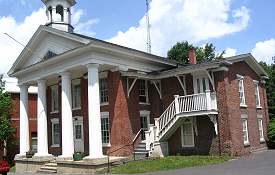 Greek Revival architectural style. Built in 1859 as the county's first Courthouse, Registry Office and County House. Sessions of the Court ceased in 1950. The building now belongs to the Brome County Historical Society, housing its archives and a replica of the original Courtroom.